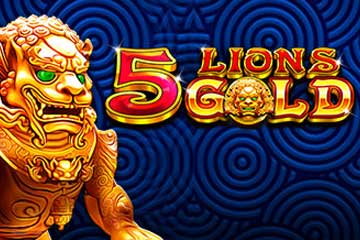 Go back in time to historical China with an online slot machine brought to the gaming fans by one of the best gaming companies in the business, Pragmatic Play. 5 Lions Gold has five reels and 243 ways in which you can achieve a win. I have some good news for the die-hard gaming fans, and that is that they can play 5 Lions Gold on any device of their choice, whether its a mobile phone, tablet, PC or a laptop. As for the betting limits of 5 Lions Gold, they go from a minimum of €0.18 to a max of €90.

Read my review regarding this Pragmatic Play game, and you'll be able to conquer 5 Lions Gold in no time!

Gameplay And Symbols Of 5 Lions Gold

The low worth icons at 5 Lions Gold are the common playing cards form ten to A. On the other hand, the 5 Lions Gold symbols with much significant value are the ones included in the following list:

The dragon is going to give you some nice rewards. If you manage to acquire five of them, you're going to get a 7x multiplier. The wild of 5 Lions gold represents a gold lion head. The wild icons are only going to show up on the second, third, and fourth reel and will serve as a type of replacement for any other with the exception of the scatter symbol. The yin yang is the scatter icon of 5 Lions Gold slot machine, and it only shows up on the second, third, and also on the fourth reel. If you get three 5 Lions Gold scatter symbols, one special bonus feature is going to be activated. That 5 Lions Gold bonus feature is the Free Spins. You can get the following free spins and multipliers as rewards:

5 Lions Gold is a fantastic slot machine with entertaining gameplay, stunning visuals, and some unique bonus features. So, all that remains for the gaming aficionados is to try and play 5 Lions Gold!

Bounty Of The Beanstalk