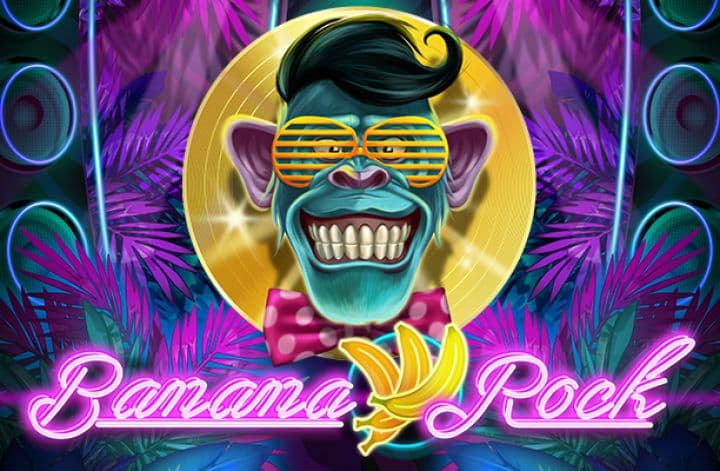 Banana Rock has been introduced to the player's thanks to one of the most famous software providers in the world, and that is Play'n Go. This slot machine happens to be packed with ten paylines, and Banana Rock also has five standard reels. A rock band consisted of five monkeys is the theme of Banana Rock online slot game. There is good news for the gaming fans because they can have fun with Banana Rock on any mobile platform of their choice, whether its the mobile phone or tablet. You can start to play Banana Rock online game only if you invest at least €0.1 on a bet and the biggest amount would be exactly €100.

Read my review which is all about Banana Rock online slot, and when you read it fully you will be able to know every detail of this slot machine.

How To Play Banana Rock?

Besides the music from the rock band, you could also sense that there’s a neon feel to the Banana Rock online casino slot game. Some of the lower value icons are the playing cards J, A, Q and K. The high-value icons of Banana Rock are the members of the band, the five monkey symbols to be exact. The yellow monkey of the band happens to be the symbol which has the biggest value, and if you get five yellow monkey symbols, you are going to be rewarded with a 5x multiplier.

A disc represents the wild symbol of Banana Rock, and its main function is to serve as a type of substitution for every other icon in the game.

The yellow monkey is the so-called “Rock N’ Rollin” wild icon. This symbol can show up on every reel of the slot. When you acquire two or perhaps more yellow monkey symbols you are going to activate one of the Banana Rock bonus features, “Rock N’ Rollin” respins. Icons freeze and you get a free respin. Two “Rock N’ Rollin” wild icons, one which is the most on the right side and one which is most on the left side are going to connect to some other wild changing the positions in a horizontal or vertical line. When the feature is over, you can win a big number of wilds and successful combos.

The logo of the slot represents the wild symbol, and it can only show up on the first and fifth reel of Banana Rock online game. In a situation when you manage to get a scatter on the first and the fifth reel, you are going to activate the free spins feature, and you'll get a round of free spins. One logo icon will get you one free spin, which is great.

You should really pay attention to the symbols of Banana Rock slot game that happen to cover the whole reel. Also, every member of the band comes with a certain multiplier, starting from 2x to 5x.

There’s an Encore Spin bonus feature in Banana Rock, and if you get one of the band members, you will surely win some cash. Something important to say that when you combine the multipliers from the free spins and the Encore Spin, your stake is going to be multiplied exactly twenty-five times, which is just fantastic.

Another great slot from the software provider Banana Rock with some interesting bonus features and gameplay, you should really try and enjoy in Banana Rock free no download online game!