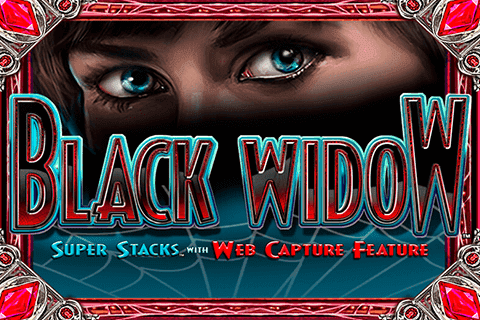 Developed by IGT, this slot has nothing to do about spiders, so you don’t need to fear to play it. Black Widow slot game it’s a reference to a lot of crimes where women killed many men to get rich which, of course, it’s not right. It has a very deep and dark feel to it, which makes this slot not for everyone, especially with spider webs on the backdrop. It has 5 reels and 40 paylines, and it’s amongst one of the best free slots by IGT. You can benefit from what Black Widow slot game has to offer you.

You have a lot of symbols that depict these women and their victims, but as the lowest paying symbols, you have playing cards. The highest ones are the 3 male victims and Black Widow herself, which is a beautiful woman. The logo of Black Widow slot game is the wild symbol, and has the best prize on this slot, with 1000x your bet. The poison symbol is the bonus one, and it triggers one of the features that you have available on Black Widow slot game.

Before a spin, a symbol is chosen randomly and appears stacked on the reels, covering all positions on 1 reels only, which is called Super Stacks. This is amazing since it can create even more winning combinations, rewarding you with better payouts.

The bonus symbol only appears on reels 2, 3 and 4. However, you need to have 4 of them to trigger 7 free spins. During those, you will need to capture a female or a male symbol that needs to be in the centre position on reel three. Each character has a multiplier implied, which will increase every time they are captured, applying it to your bet. However, the woman killer works differently. When you capture her, she will pay the multipliers of the other characters, and will also increase their multipliers, which can result in incredible payouts.

Black Widow slot game is perfect for those who want mystery, darkness, danger, and have fun too. It’s not a slot for those who aren’t strong since it can cause a lot of uneasiness. However, it’s one of the most incredible free slot machine games that you can play, so you just have to make your bet and start enjoying it.