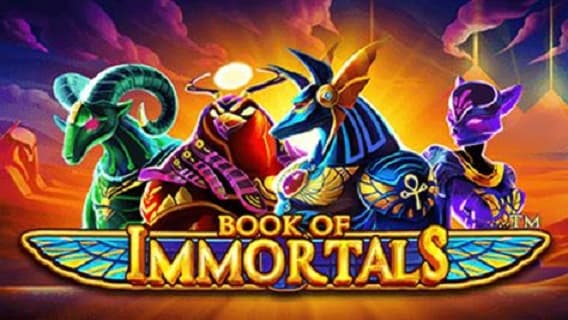 Book of Immortals happens to be an ancient Egyptian-themed slot with a more modern look to it. This slot is powered by one of the biggest companies in the gaming niche, iSoftBets. Book of Immortals is packed with twenty paylines, and it also has five regular reels.  A fact that will bring a smile to many gaming enthusiasts is that they can play this game on any device which they prefer, whether it’s a mobile phone, tablet or PC. As for the betting limits in Book of Immortals, you can play it from a minimum of €0.1 to a max of €100.

Read my in-depth review regarding Book of Immortals, so you can see for yourself, why is this slot offered in many online casinos around the globe!

Gameplay And Symbols Of Book Of Immortals

The symbols which have a low value are the standard playing cards from A to 10. Onto the more valuable one, which are four Egyptian animal gods designed in a futuristic way. The most rewarding icon among the gods is Anubis. If you somehow manage to get five Anubis icons, you are going to be rewarded with a 15x multiplier, which is fantastic. The Book of Immortals has two functions: to serve as a scatter and as a wild. If you get five, four or three Book of Immortals symbols, you will get the following multipliers as your reward, respectively:

Also, you’re going to activate one more bonus feature of Book of Immortals, and you’ll receive ten completely free spins. On every spin you make in Book of Immortals, one icon is going to be selected in a random fashion. What that certain icon does is, that it expands and also fills the entire reel where it lands. More significant symbols, the gods, are immortal and can fill one reel in the duration of one round, which is an incredible ability. I have to say that re-triggers can happen too.

To add, every time you make a spin, you have a real good chance to activate another bonus feature of Book of Immortals, the Scarab Swap. Many scarabs are going to show up on the reels, and they have the power to land a maximum of ten icons.  After that, the scarabs change those symbols in order to get you a better winning combo.

To add, Book of Immortals have low to medium volatility and an RTP of 96.31%, which satisfies the standards of one of the leaders of the e-gaming business, iSoftBet. Regarding the maximum amount that one gaming enthusiast can have in Book of Immortals, is exactly 1500. This is the prize that the players are desperate to win.

The Book of Immortals is one of those slots which have many virtues. One of the is the slick visuals, followed by some superb features and entertaining gameplay. If you’re a gaming fan and you prefer ancient Egyptian slots, then you should definitely try out Book of Immortals. Get going as soon as possible!