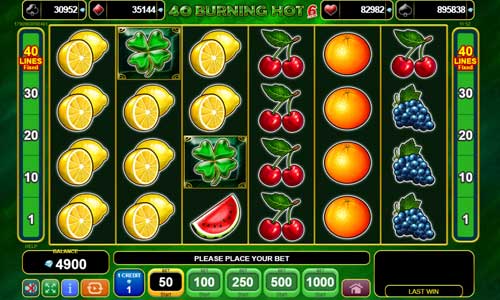 Burning Hot 6 Reels joins the long list of fruit-themed video slots from EGT. After playing this game for several days, here is my review:

5x6 is the reels set-up for 40 Burning Hot 6 Reels, with only 5 active lines. EGT has the usual features like a Star, Clover Wilds, as well as Scatters (Dollar Signs).

When it comes to wagers, the slot uses two mechanisms, which are the credit value, and the number of coins. Bets range from 10 to 200 coins.

The Lucky 7 is the symbol that will assist in boosting the payouts, and with up to 6 such symbols, 40 Burning Hot 6 Reels will pay as much as 600x the stake per payline, or 3,000x the stake for the entire lines.

The features used by EGT on 40 Burning Hot 6 Reels include a common mix. The most notable is the Clover Wild that works as a substitute for the regular symbols.

Also, the wild is capable of expanding, and this way, it can cover the entire positions of the reel where it’s present. However, since the Clover symbol only appears in the middle four reels, you cannot use it on its own.

EGT has offered two scatters on this slot, and they come in handy when you want to trigger specific cash prizes.

The first type of scatters is a Dollar Sign which appears on the entire six reels, and its capable of delivering wins amounting to 2x to 500x the stake. This is possible with between two to six present symbols.

Then there is another version of scatters that is represented by a Purple Star, but it only appears on the middle four columns. If you manage to land between three and four of such, the slot will reward you with payments of up to 10x or 200x the used stake amount, respectively.

40 Burning Hot Reels uses a very simple theme, and the developer has included lots of classic symbols that include fruit symbols. I find the design quality used on this slot to be fairly low, and not anywhere near a modern setup.

Burning Hot 6 Reels may appear like an unusual video slot machine, however, there is nothing new that I see here, and modern choices will offer far better entertainment.

Aladdin and the Sorcerer