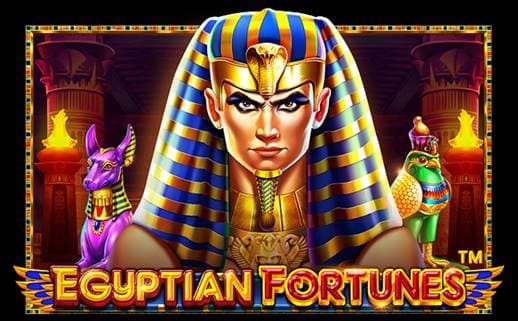 Egyptian Fortunes is as its name suggests, an ancient Egypt-themed slot. This game is introduced by one of the biggest software companies in the gaming niche, and that happens to be Pragmatic Play. Egyptian Fortunes has five regular reels and its also packed with twenty paylines. I have some very good news for all the gaming admirers out there because they can enjoy Egyptian Fortunes from any mobile platform of their choosing, whether it’s their phone or tablet. Regarding the betting limits of Egyptian Fortunes, they go from the bare minimum of €0.2 to a max of €100.

Read my fully detailed review concerning Egyptian Fortunes to get familiar with the game very quickly!

The Gameplay And Symbols Of Egyptian Fortunes Game

The less significant icons of Egyptian Fortunes are the standard playing cards ( A, J, Q, K and 10). The symbols with bigger value are four statues of Egyptian gods, who look really majestic. The icon which will bring you some decent payouts is the pharaoh. If you get five, four or three pharaoh symbols, you will be rewarded with the following multipliers, respectively:

Also, Egyptian Fortunes has a wild symbol which can show up on any reel of the game, and it can get you a 250x multiplier.

Typically, if you get an icon which is a winning one, you can easily activate some free spins. There's a special bonus feature of Egyptian Fortunes called Energy Spins, and you have to get a specific combo if you want to activate it. In a situation where you get five  of any of the following icons, you can win five Energy Spins:

If you get four of any of these symbols, you can get four Energy Spins:

In a situation where you get three of these icons, you’ll get three Energy Spins:

Egyptian Fortunes has another bonus feature. That is the Free Spins feature. You can easily activate it if you acquire the bonus icon on the fifth, third and first reel of the game on the exact same spin you took. Afterwards, a prize will be given to you in the form of six free spins, which is fantastic. Just before the start of this Egyptian Fortunes bonus feature, a certain scroll is going to spin, and you'll be presented with three icons. Those symbols will be in play only for the duration of the free spins, plus the wild which can land on the fourth and second reel.

Egyptian Fortunes has medium to high volatility and 96.5% RTP, which is well above the average standards of Pragmatic Play.

Egyptian Fortunes is one of the online slot machines; you can play forever, mainly because of its incredible bonus features and stunning visuals. I would recommend to the gaming fans to go and play Egyptian Fortunes!

Quest to the West