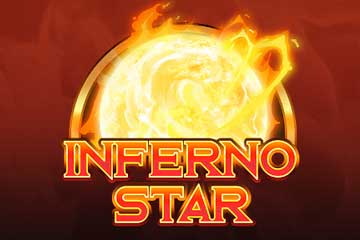 Inferno Star is an online slot machine released by one of the giants of the software industry, Play’n Go. This game is a fruit slot machine with some very interesting symbols, and it is packed with five reels and ten paylines. I have some really good news for the gaming fans, and that is that they can enjoy in Inferno Star from any mobile platform of their choice, whether its a mobile phone or a tablet. As for the betting limits, it goes from a minimum of €0.5 to a max of €100.

Read my in-depth review regarding Inferno Star, and you’ll be able to learn some fascinating information about this slot machine!

Gameplay And Symbols Of Inferno Star

In the whole game, the Inferno Star icon, which will bring you some amazing rewards is the burning sun. If you somehow manage to acquire five, four, or three burning sun symbols, you will get a prize in the form of the following multipliers, respectively:

If you get minimum one sun icon in the duration of the free spins, it is going to freeze, and you will get a handsome prize in the form of one respin. Those Inferno Star free spins won’t stop until the moment when no sun icons show up, or if you somehow manage to get a sun symbol on every reel of the game. In addition, five, four, or three suns will get you some impressive multipliers, which will be presented in the next list, respectively:

This means that five scatters on every reel of the game, will get you a 2500x multiplier, which is amazing really.

Something to add, which is very important to know is that Inferno Star has a 96.38% RTP, which is great by the always demanding standards of one of the most famous software providers out there, Play’n Go. Also, the biggest amount of coins a player can possibly win is exactly 250000!

Inferno Star is an incredible slot machine with one-of-a-kind bonus features, entertaining gameplay, and some really stunning visuals. So, all that remains for the gaming enthusiasts is to go out there and try their luck with Inferno Star!