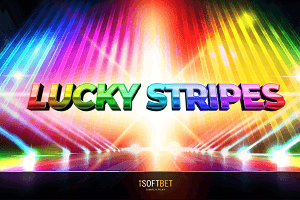 Lucky Stripes is a slot released by one of the biggest software providers in the world, iSoftBet. This free no download online slots game is packed with one payline and three reels. The diversity of colours can be seen immediately in this game making it really hard not to pay attention. I have some very good news for all gaming admirers out there because they can enjoy Lucky Stripes from any mobile platform, whether it's a mobile phone or perhaps a tablet. As for the minimum and max bet, it goes from €0.01 to €1.

Read my in-depth review with maximum focus so you can be able to play Lucky Stripes with ease!

You can see that the set up of this iSoftBet slots game is not like you would encounter in other slot machines. It has three reels, and you can have winning combos if you manage to get matching colour icons or wild symbols across the second reel of Lucky Stripes. The colour icons which are located on the second reel have a coin worth on them. If you somehow pull it off and make a whole line, you'll be rewarded with this handsome prize. Those rewards which you will eventually get in Lucky Stripes, depend on the colour of the line:

Something quite important to mention is that Lucky Stripes has medium to high volatility and a stunning RTP of 95.92% RTP. The biggest amount of coins a gambling enthusiast can get in Lucky Stripes slot machine is exactly one hundred, which is fantastic.

While I was playing Lucky Stripes, I was just mesmerized with the visual design and the gameplay which was very interesting. Lucky Stripes is a real gem of a game, and you should try to play it right away! Don’t wait, invest some money, and get going!