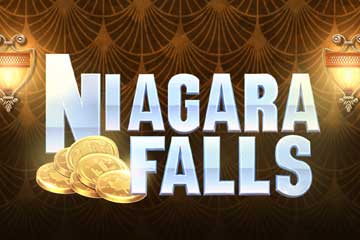 Niagara Falls is an online slot machine introduced to the gaming fans thanks to one of the leaders of the e-gaming market, Yggdrasil Gaming. This game has the 1930s feel to it, and it is packed with five reels and twenty paylines. I have some really good news for all the gaming fans around the globe, and that is that they can play Niagara Falls on any mobile platform of their choice, whether it’s a mobile phone or a tablet. The betting limits of Niagara Falls go from a minimum of €0.2 to a max of €400.

Read my review about Niagara Falls so you can get to know the game better!

Gameplay And Symbols Of Niagara Falls

The symbols of Niagara Falls are going to be included in the following list:

If you get five Niagara Falls icons you’re going to be rewarded with these multipliers:

Also, Niagara Falls has a wild symbol, and if you somehow get five of them, you’re going to get a 10x multiplier. This Yggdrasil game has three special bonus features. There is the incredible Coin Drop special bonus feature. There’s a real possibility that a gold coin is going to show up on the fifth reel of the game every time you make a spin in Niagara Falls. Then, that gold coin is going to fall from the top of the playing screen, and it will leave a trail. The coin will show up on the bonus slot which happens to be located on the very bottom of the Niagara Falls reel grid.  In a situation when the coin shows up on a bonus slot which has a bonus, you're going to be rewarded with these prizes:

If you want to activate the Free Spins special bonus feature you’re obliged to acquire whiskey barrel icon on the fifth, third and first reel. You’ll get a nice prize in the form of five free spins.

Yet another bonus feature is the Niagara Falls Cash Fall feature. You can activate this particular game any time you make a spin. In this feature, the coins are going to fall and show up under the Niagara Falls reel grid. Also, they’ll be added to a meter which is located under the slot machine’s reels, and the number of coins that you acquire during this feature will be given to you as a reward.

Yggdrasil Gaming rose to the occasion with this slot machine, which is full of great bonus features and you’ll have a big potential to get some wins. So, fellow gaming fans, I recommend you to try and play Niagara Falls right away!