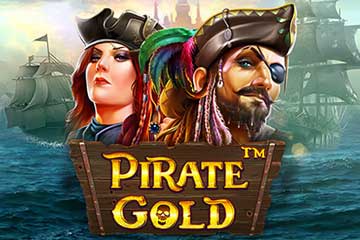 Go on an exciting treasure hunt with some pirates in Pirate Gold, an online slot machine released by one of the most famous software companies in the e-gaming industry, Pragmatic Play. This game is packed with five reels, and it also has forty paylines. There's a fact that will certainly bring joy to many gaming enthusiasts across the globe, and that is that they can play Pirate Gold on any device of their choice, whether its a PC, laptop, mobile phone or tablet. Regarding the betting limits of Pirate Gold, they go from a minimum of €0.4 to a max of €200.

Read my in-depth review about Pirate Gold, and you'll know many interesting facts about this Pragmatic Play Slot Game

Gameplay And Symbols Of Pirate Gold

In the background of the Pirate Gold reel grid, you'll see a couple of ships in a harbor covered by fog. The icons with which you will encounter in Pirate Gold will be included in the following list:

The pirates of both genders will give you the best prizes in Pirate Gold. If you acquire five of either of these pirates, you’ll get rewarded with a 12.5x multiplier.

The treasure chest represents the wild icon of Pirate Gold. This symbol serves as a type of replacement for any other Pirate Gold icon with the exception of the scatter. Also, the wild symbol can show up on every reel except the first one.  The scatter of Pirate Gold the is ship’s compass.

If you get eight or perhaps more Pirate Gold money bags, you’ll trigger this feature. Those money bags will freeze, and three respins will happen. Once those respins begin, you’re going to see:

If you manage to get a money bag, you’ll get another three Pirate Gold respins, which is just amazing. When the respins come to an end, everything that you won is added and given to you as a prize.

Something that is quite important to mention is that Pirate Gold has high volatility and a 96.5% RTP, which is great.

Pirate Gold is one of those games that will keep you entertained for a long time, considering the fact it has some unique bonus features and super-fun gameplay. Go and enjoy in Pirate Gold!

The Eye of Dead