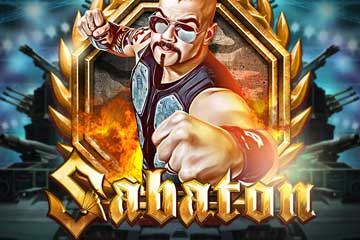 Sabaton is an online slot machine brought to you by one of the giants of the e-gaming niche, Play’n Go. The name of this slot game is based on a metal band from Sweden. Sabaton is packed with five reels, and it also has ten paylines. I have some news that will bring a smile to every die-hard gaming fan, and that is that they can enjoy in Sabaton from any mobile device of their choice, whether its a mobile phone or a tablet. As for the betting range, it is pretty wide, and it goes from a minimum of €0.1 to a max of €100.

Read my well-elaborate review regarding Sabaton, and you’ll get familiar with this Play’n Go slot really quick!

How To Play Sabaton?

Behind the Sabaton reel grid, you'll see a tank. The icons with the less significant worth will be included in the following list:

The members of the band are the much more significant icons of the online slot machine, Sabaton. One of the rockers of Sabaton is going to give you a 10x multiplier if you somehow manage to get five of that symbol. Which means, that icon is the most valuable one in the game. Joakim, who happens to be the lead singer of Sabaton, represents the wild symbol of this Play’n Go game. He serves as a type of replacement for any other icon with the exception of the scatter. In a situation where you get five, four, or three of the wild symbols, you're going to be rewarded in the form of these multipliers, respectively:

There is a special bonus feature called Metal Stacks and Mystery Symbols. One of them is going to be chosen in a random manner as a stack of that particular icon is going to show up on the Sabaton reel grid. What Mega Symbols do, is that the Sabaton metal band members are larger and they’re going to give you larger payouts, which is great.

There’s also a bonus feature, the Chained Reels which is activated in a random fashion. Two or three neighbouring reels are going to show icons which are going to help you to get some nice wins during the time you play Sabaton.  Those symbols are going to show up on the fourth, third, and second reel.

You're also going to see the Last Stand bonus feature. Once activated, this Sabaton special bonus feature is going to choose one or two reels and they’re going to become wild.

Last, but not the least, is the Sabaton Battalion Spins feature. This amazing bonus feature is going to be activated once you get exactly nine Sabaton cross scatter icons. Then, you'll get seven free spins, and afterwards, an icon is going to be selected in a random manner. That icon is going to be transformed into the previously mentioned Metal Stacks and Mystery symbol.

Once you get to play Sabaton, you'll never get enough of it, because the visuals are fantastic, the bonus features are one-of-a-kind, and the gameplay is super-fun. So, I would recommend you to go out there and enjoy in Sabaton!