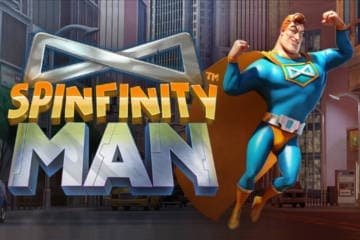 Who’s better, the superhero, or the villain? Find out at Spinfinity Man, an online slot machine released by one of the biggest names in the software industry, BetSoft. This game has seven reels, and it has Cluster Pays, which will be of a great assist to you in making some successful combos. I have some good news for the gaming enthusiasts, and that would be that they can play Spinfinity Man on any device of their preference, whether its a mobile phone, tablet, PC or tablet. As for the betting limits of Spinfinity Man, they go from a minimum of €0.1 to a max of €10.

Read my review regarding this BetSoft game, and you’ll be able to conquer it in a matter of minutes!

How To Play Spinifinity Man?

The low-value symbols are the usual card icons form ten to A. Meanwhile, the symbols with significant will be included in the following list:

If you get four or more identical symbols, you’re going to form a cluster and winning combos in Spinfinity Man. When you get a win in this Betsfot game, the icons which made you achieve the win, are going to be replaced by new symbols and you’ll make one more successful combination. A minimum of six Spinfinity Man exploding cluster will trigger a special bonus feature. That feature is called Fan Girl Fame. When this Spinfinity Man bonus feature is triggered, it will reward you with a number of icons chosen in a random fashion, and you’ll get some winning combos.

Also, Spinfinity Man has a wild icon, which serves as a type of replacement for any other symbol in the game and can be a big help to you when forming those successful combos. Players can activate five powers, once they see the superhero, Spinfinity Man on the reel grid of this Betsoft slot:

Every last one of these superpowers makes the Spinfinity Man icons disappear in a whole different way. Once the infamous Mr. X shows up, he will make you do some progress on the Villain Trail. If you happen to go to the end of the trail, you're going to activate a special bonus feature of Spinfinity Man, Free Spins. You’re going to get ten completely free spins and a chance to activate some nice additional bonus features.

What is important to mention, is that Spinfinity man has high volatility and a 95.8% RTP, which is great by the high standards of one of the leaders of the gaming world, BetSoft.

Spinfinity Man is yet another fantastic addition from BetSoft, who definitely didn't disappoint with this online slot machine. This game has some incredible bonus features, entertaining gameplay, and stunning visual graphics. All that remains for the fellow gaming enthusiasts is to go and play Spinfinity Man right away! Test your luck, and get going!