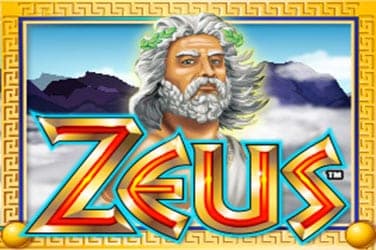 Zeus II is released by a well-known software company called WMS. Go on an adventure to the Mount Olympus in this Ancient Greece- themed game. This online slot machine is packed with five regular reels, and it also has fifty paylines. Some very good news for the gaming enthusiasts is that they can play Zeus II on any mobile device of their choice, whether it's a mobile phone or a tablet. Regarding the betting range of the game, it goes from a minimum of €0.4 to the very maximum of €1000.

Read my review about Zeus II carefully so you could get familiar with the rules and gameplay!

How To Play Zeus II?

The symbols of Zeus II are contained in this list:

The most rewarding icon in this WMS casino slots game is the Zeus himself. If you manage to acquire five Zeus symbols in Zeus II on a single payline, you are going to be rewarded in a form of a 3.75x multiplier. In Zeus II, the wild symbol represents the temple which also serves as a replacement for any other icon in the game with one exception, the scatter. The temple only shows up on the fifth, fourth, third and second reel. You have to pay attention if Zeus shows up on every position on the first reel. If he does, you are going to activate a very special bonus feature, which is called Hot Hot Super Respins. Thanks to this Zeus II feature you will receive two respins. The first reel is frozen and also is the mighty god Zeus and the wild icons. This feature assists you in filling every reel in the game with the most rewarding symbol, Zeus.

Another fascinating bonus feature is the Zeus II feature. The scatter icon of Zeus II is the lightning bolts. Once you manage to acquire three scatter symbols on the third, second and first reel, your prize will be ten completely free spins. If you get some extra Zeus icons and wilds, you will trigger the before-mentioned special bonus feature- Hot Hot Super Respins. When you acquire three lightning bolt icons on the third, second and first reel, ten free spins will be given to you.

Regarding the maximum times, your stake can be multiplied it can go up to a max of 150x, and you can easily get some big money.

Something that is crucial for you to know is that Zeus II has medium volatility and a 96.768% RTP, which is above the average standards of WMS. Also, the max amount of coins a certain gaming aficionado can get while he plays Zeus II is exactly 150000.

Zeus II is currently one of the most popular online slot machines you can play. This brilliant game from WMS has an excellent visual design, quite entertaining gameplay and bonus features with which you can win some big money. Test your luck and play Zeus II for real money at a new online casino!