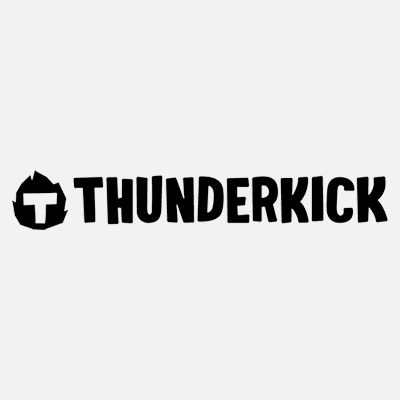 Thunderkick’s ⚡founded not that long ago, in 2012, in Sweden✅ Compared to some other companies on the market, they are still very young. This, however, should not be taken as a drawback, as Thunderkick is one of the fastest growing and most attractive developers in the current climate.✅They are known for bringing and introducing innovative concepts and unique themes into their casino games.✅Their games are different and unique in style, as this software developer focuses on the quality of their games instead of the amount.✅There are no downloads required to play their games, as their software easily integrates with all platforms, including iOS, Android and Windows Phone. ⏩

Thunderkick understands its customers and is fully aware of the most significant market trend – casino slots. Their beautiful and smooth slots are a joy to play and are an experience every casino player should go through. No matter if you’re a season gambling veteran or just a novice player starting out, Thunderkick has the perfect game for you.

Their video slots are some of the most ambitious on the market and feature excellently designed playing screens. Some of their most popular games are Spectra, Well of Wonders, Frog Grog and Esqueleto Explosivo. Most of the Thunderkick games feature fixed paylines, customizable features and a very high RTP (Return to Player), which is always set above 96%.

Small, but Packs a Punch

Unlike other reputable software providers, Thunderkick has a relatively small employee list, to cut all of the bureaucracy and middle management out of their business. Though their staff list is relatively short, their partner list is anything but that.

Thunderkick has a partnership with some of the biggest online and land-based casinos, including names like William Hill, VeraJohn Casino, Unibet, Leo Vegas, LV BET Casino and many many more. The few casinos mentioned above speak in the length of the providers quality of reputation. Though small in stature, Thunderkick packs a big punch and can go up against the most prominent opponents in the gambling scene.

One of the biggest reasons why Thunderkick has progressed so far in their short history is their player-friendly business model. They put a lot of effort into ensuring their players enjoy maximum safety and security when playing.

All of Thunderkick video slot games are tested and certified by reputable gambling authorities. They also feature an outstanding customer support service and are very active on social platforms as well.

Their team of experienced professional developers all of their products in-house, from graphics and audio to gameplay and mechanics. Software developers, games developers, and visual and sound artists all work under the same roof to create a cohesive and well-rounded product each and every time. Thunderkick employees are professionals in their line of work and are more than capable of providing a great and memorable gaming experience.

⭐ Which are the most innovative games from Thunderkick?

Thunderkick is known for some of the most unique innovations, especially in the overall design of its games. For example, spinning reels seem to have been replaced in numerous titles, and a good example is the Esqueleto Explosivo 2 slot. Here, we see singing skulls rolling that are moving towards you but are then replaced in each spin.

⭐ Which are the top Thunderkick slots?

Thunderkick offers some of the greatest reel-spinning games, and their top titles are a level ahead. They come with excellent features, and top-rated bonus spins. Some good examples are Pink Elephants, Spectra, and The Rift.

⭐ What is the volatility level of Thunderkick slots?

Different Thunderkick slots come in different variance (volatility), and to serve every level of player, the developer offers slots with low, medium, medium-high, and those that are highly volatile.

⭐ How do Thunderkick games perform on mobile?

The developer seems to have done a good job with their games, and players get to enjoy seamless gameplay on their mobile devices, even while on the go!