Poker is a difficult game to master, especially if you're starting for the first time. Playing online is more competitive than ever, and there are loads of players out there who will happily take your money when you're a beginner. Lots of new players get put off by the steep learning curve, but if you stick it out, it can be very lucrative. The best thing you can do as a beginner learns and study the game as much as you play. Over time, your skills will improve, and you'll have a much better chance of success. As you play, you should also watch out for these common mistakes that a lot of new players make so you can avoid them.

Playing Too Many Hands

When you're a beginner, playing often is a great way to gain valuable experience. However, some players take this too far. Being successful in poker is about knowing when to fold as much as it's about knowing when to call and raise. As a new player, you should be cautious and ensure that you're not playing too many hands, especially if they're weak and won't get you very far. Keep your play tight, and don't go overboard during your online poker games. You might feel like you're missing out on the experience, but your bankroll will thank you in the long run.

Playing Every Type of Poker

There are loads of different types of poker, all of which offer a different experience. As a new player, you should be focusing on the basics and getting as much experience in no-limit Texas Hold 'em as possible. This is the most common type of poker, and the version which has the most available resources and guides to help you learn. While it can be fun to try out different rules occasionally, you risk spreading yourself too thin and spending too much time getting experience in a different ruleset. Overall, this won't help your progression as much as if you stick to one game type.

Poker is a strategy game, and you should always be thinking ahead and planning your next move. Failing to plan will lead to you reacting to your opponent's moves, allowing them to manipulate your decisions. When playing poker, you should have a predetermined strategy that can change as you gain more information. You ought to have a strategy for every hand you play depending on the cards dealt and the responses of those around the table. Many players will choose the check/call option without having a clear strategy for their actions on the turn or river. You're at a disadvantage if you have to come up with something on the sport because poker is too complex for you to do in 20 to 30 seconds.

Not Combining Practice with Study

New players will often practice without studying or study without practising. Ideally, you should be combining both to learn as much about the game as possible. Simply practising the game without a strategy isn't productive, especially when you're a new player. You have to have a structured plan for each practice session to ensure you get enough out of it. Additionally, you should be studying and focusing on what you've learned while playing. Make sure you cover situations that have come up in your games so you learn from each playing session.

When playing poker, staying calm is important if you want to stick to the correct strategy and avoid getting tilted. Losing a hand, especially if it's a strong hand, can lead to you getting emotional. You want to avoid letting your emotions get the better of you, as they can influence your decisions if you're not careful. Getting angry or upset at what happens during the game can cost you money in the long run. You'll be more likely to make mistakes, and your opponents will be able to take advantage of this. Staying calm and collected, even after a bad beat, is a sign of a top poker player.

Not Paying Attention to Opponents 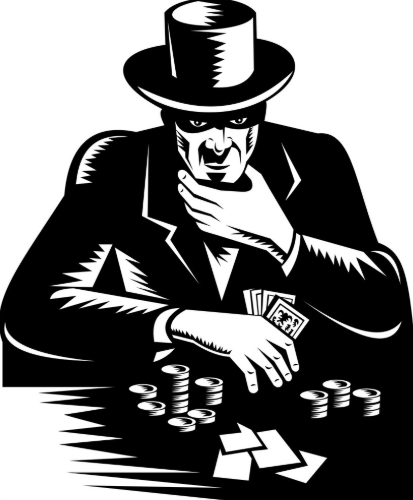 Your opponents aren't just there for you to beat. They're also an opportunity for you to gain more information and have greater success. Many beginner poker players make the mistake of focusing on their own game so much that they forget to pay attention to what their opponents are doing. You can learn a lot from watching the other players at the table, making notes of patterns in their behaviour, and telling that give away what they're thinking. The more you play and watch your opponents, the better you'll get at reading them.

The key to winning in poker is playing against opponents who are at a lower skill level than you. Although it's possible to beat players better than yourself, your luck will run out eventually. As a new player, it's challenging to find players who aren't as good as yourself, but you should definitely be avoiding the highest level of competition. For that reason, make sure you stick to lower-stakes games, even if you have a big bankroll. You should be able to identify the weak players at the table, and if you can't, then that weak player is probably you. As you gain more experience, you'll get much better at this.

Not Leaving a Bad Table

To follow on from the above mistake, you should also be ready to leave a table if it's necessary. While some players are comfortable staying at one table and playing for hours, it's always best to move around, especially if the table you're at is difficult. If you don't spot any beginner players at your table, you can simply join another one to improve your chances of success. While this is a bit inconvenient, it will help you to make money in the long run.

Bluffing is a lot of fun, and when you first start playing, it's tempting to do it at much as possible. However, you'll quickly get found out if you bluff too often, and getting called on your bluff can be a disaster. In poker, bluffing is used to get opponents to call when value betting. If you never bluff, players wouldn't have the incentive to call later on. In contrast, by bluffing constantly, bluffs will significantly outnumber value hands. As a result, your opponents can profit by calling.

Using the Same Strategy for the Same Hands

Although you might think it's best to stick to a specific strategy for certain cards, you'll find that some hands require mixed strategies. This means that you shouldn't always play the same hand the same way if you want to have a positive expected value strategy. In addition, playing the same strategy all the time makes you predictable to your opponents, allowing them to gain the upper hand.