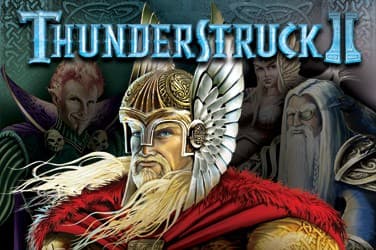 If you want a great slot to play, in which you will have a lot of fun, and you’ll absolutely love everything about it, then choosing Thunderstruck II slot game is the rightest choice you can do. It was developed by one of the best software developers in the world, Microgaming. Even if you’re new to the industry, you may know this company, since they’re known all around the world. You have 5 reels and 243 paylines on this slot. It is themed after Scandinavian gods, which are a very common topic for slots. You have great prizes available on this slot that you can win while playing, so you should try it.

In this slot, you will find gods such as Odin, Loki, Thor and Valkyrie. On the Thunderstruck II slot game, the wild symbol is the logo, and it can substitute others, but not Thor’s Hammer. It won’t apply during the Wildstorm bonus game, that is triggered at random. It gives you 1 spin with up to 5 reels that can turn wild. If you get 4 or more of these wild reels, you can have great winnings on Thunderstruck II slot game.

The main bonus game on this slot is the free spins, and in them, you have several levels. To trigger them, you will need to land 3 or more of the hammer symbols. You’ll get 4 levels, which you can trigger if you get the bonus round several times. The Valkyrie is the first level, and you will trigger it from your 1st to 4th triggers. You can receive 10 free spins, and during those, your winnings are multiplied by 5x. You can re-trigger this. The Loki feature is triggered from the 5th to the 9th triggered, and you’re given 15 free spins with the Wild Magic symbols that are normal ones that turn into wild. The Odin is triggered from the 10th to the 14th feature triggered. You get 20 free spins, and also the Wild Raven bonus game. The symbols of this feature will randomly turn symbols into multipliers. You then have the Thor, that you can play from the 15th onwards. You receive 25 free spins, with Rolling Reels. And you can win several multipliers that will change your payout that you get by playing Thunderstruck II slot game.

This is a wonderful slot that you can get access to, although it was launched in 2010. It’s still a very modern and very enjoyable game. Thunderstruck II can give you good winnings, that you will love.

Kingdoms Rise: Guardians of the Abyss

Pixies of the Forest